Home/News, News/Vigilant at VII Congress of SECURITY DIRECTORS
Next

@VIGILANT_SYSTEM attended the VII Congress of SECURITY DIRECTORS,  #VIIDirectores, which must be said to have far exceeded all expectations.

More than 300 professionals took note of the valuable advice offered by high-level speakers in the 19 interventions plus 2 round tables.

Inaugurated the event @CarlosNovilloPi, Director of the Agency of Security and Emergencies of the Community of Madrid, along with the presidents of the associations organizing the event @ADSI_ES‏, @asis_143, AEDS and the president of the magazine @Seguritecnia

Juan Muñoz, president of @asis_143, moderated the debate on “The ideal of the corporate security model” in which participated:

Cesar Álvarez, project coordinator of @Fund_Borreda, presented us with a preview of the study “Security contracting by the public sector. Analysis of the impact on Private Security in Spain” and that after the aperitif we hope to publish promptly.

Antonio Ramos, from  @leet_security, explains the NIS Directive on the draft Law on Network Security, which comes into force on 25 May.

The round table on corporate security threats closed the event, moderated by Ana Borredá, president of @Seguritecnia  and representatives of:

“Among all of us, we can take credit for the fact that Spain has consolidated itself as one of the safest countries in the world”, said the general director of @policia, German López, in the closing words of the congress #VIIDirectors. 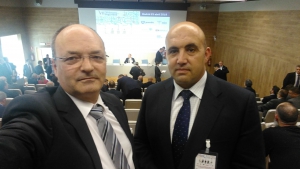 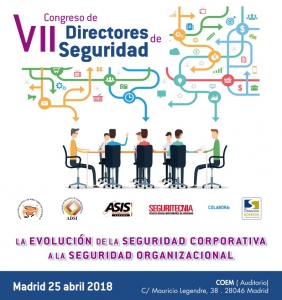